The Committee to draft new Council district boundaries will hold a meeting for public comment tomorrow morning, 10 a.m. Wednesday October 20th.  How will your neighborhood be affected?  What map and boundaries do you like best?  This is our neighborhoods’ best chance to have a say in the redistricting.

Following the 2020 Census, Lexington has been working to adjust Council District boundaries to make them more equal in population as required by law.  At their last meeting on October 6, the Redistricting Committee discussed and revised two draft maps with different district boundaries.  Then they chose just one to offer for public comment, the updated draft map, which has been published in the newspaper and posted on the city Redistricting site.

Voting Precincts are the building-blocks for the Council Districts.  To find whether your neighborhood might change Council District, look for the red cross-hatching on the draft map.  If you live in a red zone, your precinct would change to a new Council District if this map is approved.  You would have a different Councilmember.

Do you welcome the change, or object?  Make your voice heard TOMORROW:

10 a.m. Wednesday morning, October 20th, the Redistricting Committee will hear public comment on the proposed redistricting map.  You can speak in person (in Council Chambers, 200 E. Main St.), or send email in advance to redistrictlexington@gmail.com.

Which of the TWO redistricting maps shown below—the semi-finalists from October 6– do you like best?  To see details, get the Redistricting Committee Packet.  Zoom in on Map 1 on page 5 (with additional tweaks in green cross-hatching on page 7).  Find the zoomable Map 2 on page 9, with green revisions on page 11.  If you prefer a map different from the final one posted, include that in your comment.

We present below, a graphic of the two maps being considered by the redistricting committee. They show, by their colors and district shapes, that there are differences between the proposals shown by the two versions of the maps on the web site. To see the maps in detail and also see tables related to the maps, you will need to go to the link above for the Redistricting Committee Packet. We apologize for the lack of time you have to consider the two choices. 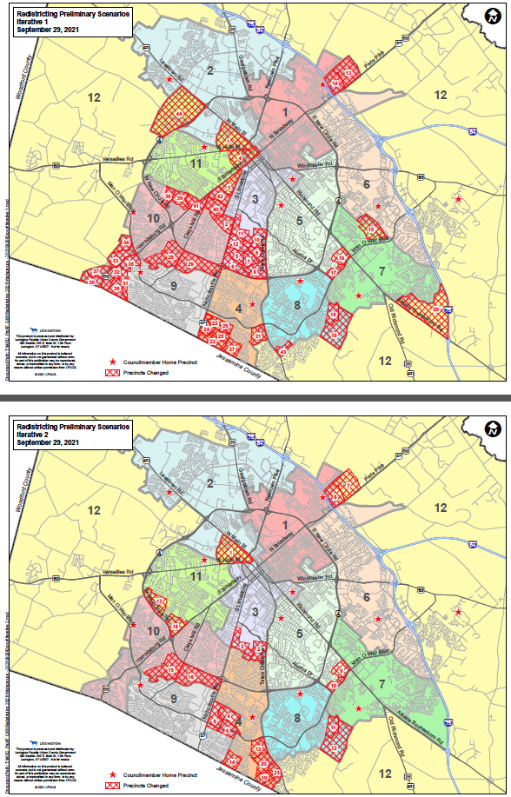 The Map 1 presented for public comment changes 44 precincts to new districts (then it tweaks a few more, ultimately changing 49 precincts in all).  The other “semi-finalist,” Map 2, which is not offered for public comment, changes 21 precincts (with tweaks, ultimately changing 24).   Both maps do what redistricting MUST do:  they create districts within 5% of the ideal average population, plus or minus, based on the 2020 census.  Beyond that, each map gives priority to different principles — drawn from Lexington’s Charter, Article 4.03 — that indicate what redistricting MAY do.  The Redistricting Packet linked above explains the redistricting process and sets out these Guidelines for the Committee on page 3.  Map 1 draws boundaries that look ahead to the district populations projected for 2030 (Guideline 8).  Map 2 changes as few precincts as possible to new districts (Guideline 9).  Other factors are social, economic, and racial or ethnic, to judge from the data provided in the Committee Packet:  keeping or joining shared interests together (Guideline 7).

The Committee meets again the following Wednesday, October 27 at 10 a.m., in the Phoenix Building, 3rd floor rear (101 E Vine St.).  Soon afterward the committee is expected to submit its redistricting recommendation to the Urban County Council.  The Council may decide the boundaries quickly, to accommodate candidates who must file between November 3, 2021 and January 7, 2022 for the coming election.  However, our Urban County Charter allows the Council until April 1, 2022 to approve a new redistricting map.  The Council has the final say on the boundaries; the committee is advisory only.